Yesterday, I posted my review for “Elected,” by Rori Shay which is the first book in this series. Here is my review of the brand new sequel, for your enjoyment. 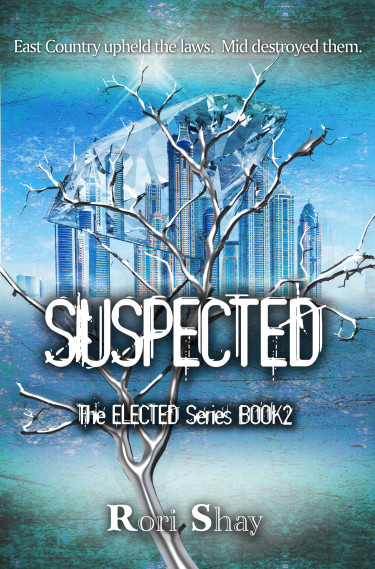 In the year 2185 Earth is rebuilding after a global eco-crisis. Countries maintain complete isolation so there’s no warfare over scarce resources. One Elected family is chosen to lead each country for one hundred years to ensure stability. Women aren’t allowed to take office and must reproduce at all costs. Technology is banned to preserve what’s left of the environment.

Yet, I’m my country’s Elected. I’ve just sanctioned technology use to ready us for war. I’m about to cross the border to spy on our neighbor. And…I’m a girl. Shhhhhh…..

As soon as I finished the wonder that was Elected, I flipped to Suspected and couldn’t stop reading. Elected filled me with fear, laughs and a sense that something was not right. Suspected backed this up.

Thanks to Red Queen, I now have a chronic Don’t-Trust-Any-Characters illness and it definitely had a presence whilst reading Rori Shay’s books. The Technology Faction was too calm, Vienne was too perfect and Mid Country was too advanced.

Suspected left me longing for Perfected, the not-yet-released finale to Shay’s touching trilogy. That cliffhanger was uncalled for.

Throughout Elected and Suspected, I enjoyed the confusion and self doubt running through Aloy’s head at every moment. She was always scared that what she did wouldn’t be good for the greater mass of her people, yet she refused to allow the minorities to continue being silent. In Suspected, she was presented with Mid Country’s awful to-be leader, Calix, which created contrast and something for Aloy to compare herself to. This boosted her sense of righteousness and created a stronger leader out of a person whom was denied the right to leadership because of her gender.

Aloy’s relationships with Vienne and Griffin were unique. On one hand, Vienne was literally made for Aloy however Griffin was meant to be her enemy. From the moment I met Griffin until the moment I die, I will ship Aliffin to Pluto and back again.

Suspected was the opposite of Elected in the sense that Aloy did not see herself and the Elected family as the enemy – but as the hero and voice of the people they ruled. I personally thought it was interesting reading about a girl who overcame her self esteem ‘issues’ (I say that in the lightest sense) and turned into a woman who came to understand that her presence prevented the real evil from murdering thousands of innocent civilians.

In certain parts of Suspected, I felt like the writing was just average, and all I wanted to do was skim through the tedious descriptions. It almost created, yet another, reading slump for me, but then it picked up again towards the end.

In conclusion, I cannot wait to read Perfected, and I would love it for you to share your thoughts and opinions on Rori Shay’s works with me via the comments below!