First of all, Happy Easter! I hope that you’re having a spectacular day, eating chocolate and reading your favourite books… Today, I have decided to review Rainbow Rowell’s ‘Fangirl’, since it’s a nice sweet story, perfect for sitting down on a beanbag, close to the heater, and indulging. 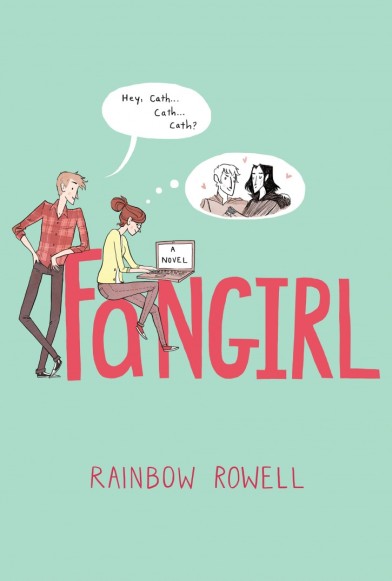 Cath is a Simon Snow fan.

Okay, the whole world is a Simon Snow fan…

But for Cath, being a fan is her life—and she’s really good at it. She and her twin sister, Wren, ensconced themselves in the Simon Snow series when they were just kids; it’s what got them through their mother leaving.

Reading. Rereading. Hanging out in Simon Snow forums, writing Simon Snow fan fiction, dressing up like the characters for every movie premiere.

Cath’s sister has mostly grown away from fandom, but Cath can’t let go. She doesn’t want to.

Now that they’re going to college, Wren has told Cath she doesn’t want to be roommates. Cath is on her own, completely outside of her comfort zone. She’s got a surly roommate with a charming, always-around boyfriend, a fiction-writing professor who thinks fan fiction is the end of the civilized world, a handsome classmate who only wants to talk about words… And she can’t stop worrying about her dad, who’s loving and fragile and has never really been alone.

For Cath, the question is: Can she do this?

Can she make it without Wren holding her hand? Is she ready to start living her own life? Writing her own stories?

And does she even want to move on if it means leaving Simon Snow behind?

If I was asked to describe this book in one word, the first word to come to my head would be ‘cute’, because that is exactly what Fangirl is; a cute, perfect, romantic novel of which has become a bible-like book for fangirls everywhere.

If you’re searching for action, adventure or fantasy, I wouldn’t recommend coming near this book. It speaks the story of a young, quirky university student obsessed with a book series about a mage named Simon Snow, as she travels the world of love, school and fan-fiction.

Personally, I felt that Fangirl was a bit repetitive, especially during the middle of the book. Cath would go to school, write fan-fiction, sleep, talk to Levi and the cycle didn’t stop for a while. This made the novel a bit slow, and therefore not one of my favourites – as I prefer fast flowing, action packed stories, regardless of whether they’re romantic or not.

Rainbow Rowell created a beautiful ending, but a lot of us (readers) wanted more. I guess that happens with the majority of books, though. We readers can’t resist the idea of having an infinite number of books written in one world.

As Rachel (from Beauty and the Bookshelf) said in her review, one of the best aspects of Rowell’s novel is the fact that all of the characters – from Cath to her professor – felt real, which is always a fantastic thing! A few of them were boring, but it made sense, since the book was Cath’s book and Cath didn’t get to know each and every one of the people she met.

Overall, I felt that, despite Fangirl being a brilliant and unique book, it didn’t sit on my personal favourites. The plot was great, however the execution was merely above average. I would hesitate to read it again, but not go out of my way to do so.

What did you think of Fangirl, if you’ve read it? Who was your favourite character?