**Disclaimer; this post has been updated numerous times to incorporate extra additions to the series. The last update was on the 9th of April, 2018.

It was a rainy, dark Sunday afternoon and my friend, Thanushri, and I were discussing how much homework we had, when she asked for a book recommendation.

We fell into a deep conversation of our favourite books when Thanushri asked if City of Glass (of which she had not read) was more interesting than City of Bones and City of Ashes. Of course, with this, I began explaining everything to her, and then it came to me that it would be more efficient to write a post all about how to read The Shadowhunter Chronicles, than explaining it to every single person on this planet.

Welcome to the world of Nephilim. I have a feeling that you won’t be leaving anytime soon.

One of the best things about being in the Shadowhunter fandom is the fact that new stuff comes out all the time! On March the 27th, 2007, Cassandra Clare released City of Bones, the first instalment of the Mortal Instruments Series (first series).

I, personally, believed that the series was meant to stop after City of Glass, since if you stop there, most problems were resolved. Once I got out of my reading slump and began to read City of Fallen Angels, I realised that Cassandra Clare had an amazing talent of leaving small hints everywhere that don’t mean anything until later in the series (and it makes you feel like a fool for not guessing, beforehand). So please, don’t repeat my mistake, and read all 6 books.

This series consists of six books;

Long before the cover of City of Heavenly Fire was released, I decided to create my own (okay, I was just a bit bored one day, but still)… The one on the left is mine, and the right one is the real cover. 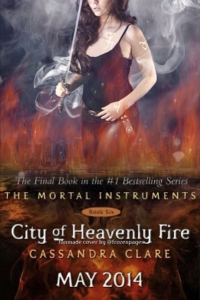 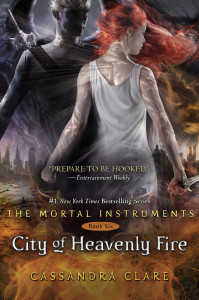 Yeah, mine was horrible, but I edited the runes and smoke well… Kind of…

Look, it was close enough.

This series was written in the middle of The Mortal Instruments. It’s final book was published on the 1st of January, 2013.

The series is a spin off of The Mortal Instruments. Set in the world of Shadowhunters and hot Herondales, The Infernal Devices follows the story of Tessa Gray as she discovers the Nephilim community in New York, about a century before the events of TMI took place.

This trilogy only consists of three books, however it’s just as ‘feels-y’;

Magnus Bane is the High Warlock of Brooklyn. Needless to say, he is a very predominant figure in both main series, but more so in the Mortal Instruments. No so long ago, Cassandra Clare, Sarah Rees Brennan, and Maureen Johnson co-wrote a series of novellas following the adventures of Mr Bane, and they’re all worth a read.

Originally, The Bane Chronicles was a set of 11 eBooks, released and published separately. However, at the end of 2014, some wise person mushed them all together and made a physical copy.

TALES FROM THE SHADOWHUNTER ACADEMY

Starting in February, 2015, a new novella from this series was released every month. Not unlike The Bane Chronicles, TFSA was released in hard copy on the 15th of November in 2016.

There are ten stories in this series;

In Cassandra Clare’s own words, The Dark Artifices is a ‘sequel/companion trilogy to the Mortal Instruments’.

The first book of The Dark Artifices was published in 2016 (along with the release of the TV show). The trilogy will follow Julian and Emma – minor characters in the Mortal Instruments series. I’m hoping for a love story of the two, since their so cute, but honestly, I have no idea. Whatsoever. Small disclaimer; I haven’t read these yet!! 🙁

This series seems to be a way off. It will be set in 1903, following the generation after Will, Jem, and Tessa (from the Infernal Devices). Nothing has really been said about this trilogy, other than the titles of the three books (with reference to Great Expectations);

WHAT ORDER SHOULD YOU READ THEM IN?

If you have a fabulous memory:

If you have a horrible long-term memory:

If you get bored VERY easily:

If you got bored after City of Ashes:

This disease is contagious. If you meet a mundane of whom has not yet read up to City of Glass, do not share your bad experiences of the first two books with them! It’s dangerous!

Instead, take advice from experienced Shadowhunters.

The first two books are merely there to explain the politics of the world, and the relationships between the characters. The shadowhunter community is way too complex to rush into. Cassandra needed two books in order to do it well – and even then, she wrote a codex. City of Glass until City of Heavenly Fire explores MODERN issues that have never hit the nephilim, while City of Bones and City of Ashes only deals with obstacles that are fairly regular in the world.

Stay strong, once you begin reading City of Glass, everything gets better!

Altogether, there are forty three books; thirty three are published and the rest are on their way to your bookshelf. Sometimes, the Shadowhunter world can be a very confusing place, but if you stick by it, you will not regret it, at all.

Updated: Hi! It’s future Bianca from 2018. I’m up to Season 3 of this TV series and it’s… idk. I mean, I don’t hate it, but I don’t love it either. It’s worth checking out (after you’ve finished at least the Mortal Instruments) but it’s not worth putting your life on hold for. I can honestly say  I preferred the books, but Season 3 is meant to roughly be City of Glass, so we might  be pleasantly surprised.